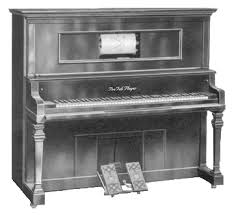 I work on all brand of player pianos new and old. For more information on repairing a player piano please call me.

What is a player piano?

A player piano (also known as pianola) is a self-playing piano, containing a pneumatic or electro-mechanical mechanism that operates the piano action via pre-programmed music recorded on perforated paper, or in rare instances, metallic rolls, with more modern implementations using MIDI encoded music stored on floppy disks or CDs. The rise of the player piano grew with the rise of the mass-produced piano for the home in the late 19th and early 20th century.

Sales peaked in 1924, then declined as the improvement in phonograph recordings due to electrical recording methods developed in the mid-1920s. The advent of electrical amplification in home music reproduction via radio in the same period helped cause their eventual decline in popularity, and the stock market crash of 1929 virtually wiped out production.